Last night was the fourth class on rapier and dagger at the Decatur School of Arms. Our goal with the lesson was to practice some of the guards and dagger parries from Capoferro’s text. In particular, plates 26, and 28.

Plate 26 demonstrates parrying with the rapier and dagger together and then making a riposte while maintaining opposition with the dagger.

Plate 28 demonstrates a dagger parry under the sword arm, the hit can be made with either a thrust or a cut, we practiced only the thrust.

Throughout the lesson we frequently make adjustments to the lesson as written to further challenge students. Here are some variations that we worked on:

I’ve been using the terminology of open and closed guards to refer to guards where the sword and dagger are separated or joined together. For instance, plate 4 in Capoferro depicts a guard of third (C) where the dagger is held back a bit from the sword, I’m referring to this as an open guard. The same plate shows a guard (E) where the dagger is shown next to the strong of the sword. I’m referring to this as a closed guard. 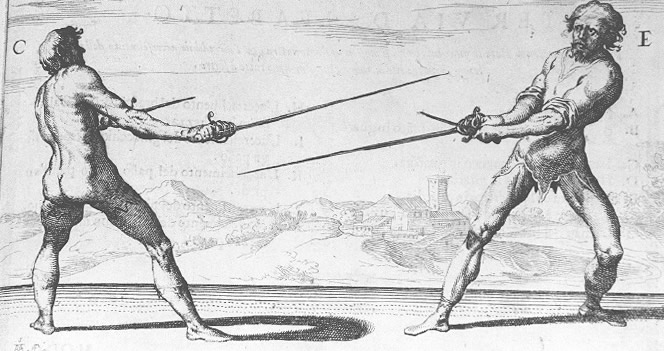 Which you described as, in your opinion, possibly the most satisfying action/result in all of fencing. I have to agree that it felt good.